Thank you for your patience while we retrieve your images.

This Chronicle is an exploratory series into film development, and therein my interpretation of the interaction between the subject, Rainey Blomgren, and the surrounding negative space. Each shot was taken with my trusted Canon’s AE-81, and developed on Ilford Matted Fiber Paper.

My original concept placed the subject on what would generally be considered the edge of a framed photograph. By "burning" only this piece of the negative onto the photo paper, the weight of her image creates an anchor on whichever side of the frame she is placed. The series, when presented as one larger image, alludes to an overall frame where various parts of the subject's body “break” that anchor. I included minor details from the surrounding space, like the fabric at the subject's feet, giving you, the viewer, a dimensional understanding to her placement while also exposing a direct contradiction to the flat, two-dimensional edge of the frame.

However, what developed from my original concept while shooting was more of a dialogue of Rainey's expression, isolated in an environment devoid of detail. The negative space creates the storyline for this unintended experience which now puts more emphasis on Rainey, the subject, than my original concept did. Hence, this is the Subject First Chronicle. 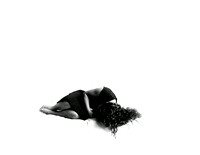